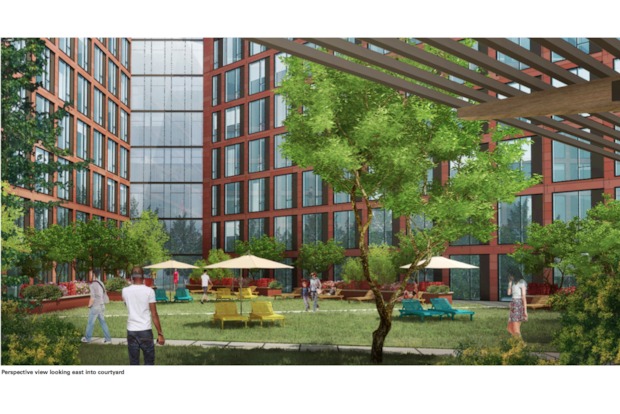 LINCOLN PARK — A 225-unit apartment building that would replace what one resident called the most blighted property in Lincoln Park could be completed in two years.

If all goes according to plan, the $80 million Lincoln Centre project would include a 10-story building at 2518-2540 N. Lincoln Ave. and renovation of the Apollo Theater.

The developer, Warren Baker of Baker Development Corp., presented a slightly revised proposal for the project at a Wrightwood Neighbors meeting Monday night.

Paul Biasco chats with DNAinfo Radio about the Lincoln Centre:

The revision included changing the brick color of the building along Altgeld Street to a terra cotta style for a more traditional “Lincoln Park block” feel.

A handful of residents at Monday night’s meeting raised concern over the number of units in the plan, but the vast majority of those in attendance applauded the developers’ plan.

“The existing property is probably the most blighted property in all of Lincoln Park,” said Deborah Brown, who lives within a block of the site. “This is the best thing that could possibly happen, it’s so desolate on our street now.”

Current zoning allows for a 75-foot-tall structure. The existing condominium building on the site is 70 feet tall.

The current building, which is recognizable by the outdoor tennis courts visible from the Brown and Red Lines, has 45,000 square feet of commercial space spread between two levels and 39 three-bedroom condominiums.

Baker owns the two floors of retail space and has contracts for the condominiums, according to the developer’s attorney.

The Lincoln Centre proposal would include mostly one- and two-bedroom apartments, with the average apartment around 800 square feet.

The developers anticipate most tenants will be young professionals.

Baker and his business partner Dan Slack said the project is important to the revitalization of Lincoln Avenue.

The extra parking and renovations of the Apollo Theater will cost an estimated $6 million to $7 million, Slack said.

The developers called those two additional features a public benefit, and hope to get permission to build the taller building in exchange.

The additional height and number of apartments was needed to justify the costs of the project, Slack said.

“We are not setting any new precedent here,” he said. “Two towers were recently approved on the Children’s Memorial site.”

Baker and Slack brought the original plans to the public at a community meeting in January, and have since met 15 times with either planning committees or individual members of the association and 30 times with individual homeowners and businesses in the area, Baker said.

“The plan has come a long way since last November,” he said.

The developers anticipate the rezoning and permit process will take about six months if Ald. Michele Smith (43rd) supports the plan.

Historically, aldermen have taken their cue from neighborhood organizations. The Wrightwood Neighbors have not taken a position yet on the proposed development.